Why Bayern Munich is a Force to be Reckoned With

It was that 10-man win against Hoffenheim this season that really said it all. The Bundesliga has already been won long before the season is complete.

Watching Bayer Leverkusen and Borussia Dortmund might be a delightful experience every weekend. But when it comes to tactics and star power, Bayern Munich has it all.

For starters, Lewandowski’s recent 5 goal haul against Dinamo Zagreb further solidified their position in the Champions League standings while current Champions Barca have been slow off the blocks. 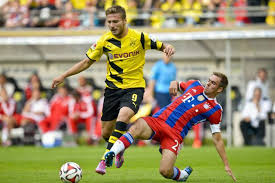 In stark comparison to Dortmund (their current challengers to the Bundesliga crown) who are known for their counter-attacking style of football that involves the use wingbacks (much like Barca), Bayern plays a possession-football brand of football.

It’s not surprising because Pep, during his stint at Barca, used the same tactics to good effect. The result will be no different with Bayern Munich given their ability to buy players for each position as well.

What’s also clear is that the tempo with which they attack is also rather brisk with the crosses, passes and headers coming in thick and fast leaving hapless Bundesliga and European clubs in their wake.

Consider their dominance in the Bundesliga over the last few years and with players like Ribery, Robben, Lahm, Muller and Gotze, there’s not much that Bayern Munich has to do for another decade.

To most rival fans, one thing is very clear – this is a tough, tough squad to beat – with Pep really taking care of every last detail.

As for Bayern fans, they’re going to enjoy themselves for some time to come as they get to feast on a goal extravaganza that their club serves up in literally every game that they play these days.

The only issue that goes against them, and much like Barca this season, is the long list of injuries that players suffer from, season after season.