When it comes to footballing prowess, in terms of tactics as well as the world’s best players, Barca remains the gold standard especially since Pep Guardiola took over manager duties a few years ago.

After winning a ridiculous number of trophies, Pep decided to leave, paving the way for his assistant, Tito Vilanova, to take over.

If you’ve watched Barca since then, you’ll notice that there has been a steady change in tactics since then. 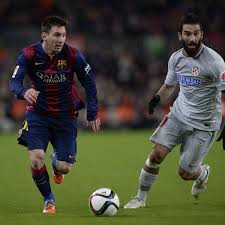 tless pressing remains as always with both Jordi Alba and Dani Alves playing as wingbacks to support the midfield and forwards.

And with the combination of Messi, Neymar and Suarez, it was obvious that the ‘double treble’ was inevitable.

Still there are weaknesses that continue to be exploited, given their game plan. First, their gameplay involves keeping the ball on the ground. No crosses or headers either. This gives opponents whose strategy involves taking the aerial route a distinct advantage.

Time and time again, it has only been Messi who has really scored a goal with a header but it is rather rare. Puyol and Pique were usually called up for corners because of the height advantage but even that has become a rarity now.

Another weakness that continues to plague Barca is the inability to deal with opponents who sit back and defend while playing for the counter. This has been noticeable in a number of games. As a Barca fan myself, the need to score first and ensure the game opens up has been made obvious over and over again.

Finally, defending against set-pieces and corners tends to be another issue that Barca struggles with. But this one is not necessarily a flaw given that this happens very rarely in all the La Liga, Champions League and Copa Del Rey games that they play all season.